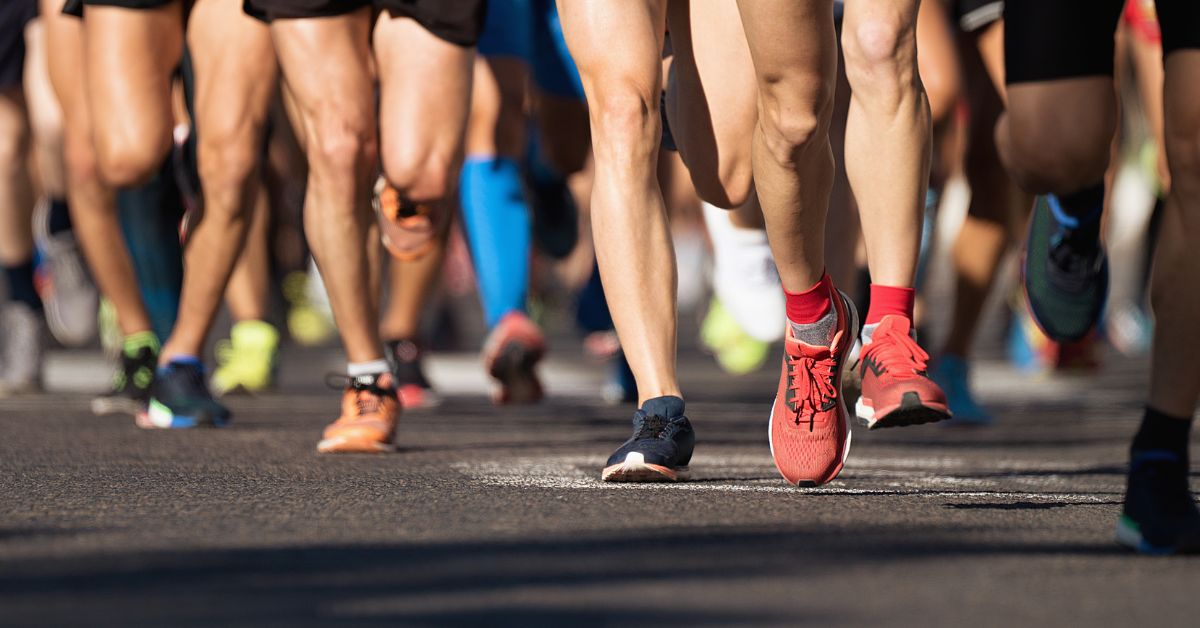 For the most part, we see running as putting one foot in front of the other.

However, if you want to make the most of your running or to run competitively, it’s crucial to think about the science and running technics that inform good performance.

Running cadence is one of these.

What Is Cadence in Running?

Running cadence, also known as stride rate, measures how many steps per minute (SPM) you take as you run. In other words, it can be described as the speed at which your legs churn over.

Running cadence is one of the common metrics used to measure running form. Your running speed is always a sum of these two elements:

As such, two runners can pace each other with the same speed but with different cadences.

One way to explain this can be:

Every individual has a natural cadence and stride they gravitate towards. This means the cadence one runs at without thinking about it or being too careful to change it.

However, there are some advantages to developing a good cadence, that is, increasing one’s cadence and shortening your strides.

Let’s explore the idea of a good cadence.

What Is a Good Cadence?

First, it’s generally accepted that we don’t have a one size fits all recommended running cadence. Instead, a runner’s cadence is often dictated by elements within and outside their control, like height, running mechanics, slope, and strength.

For example, taller runners will take bigger strides, which results in a slower running cadence.

For decades, experts encouraged runners to increase their stride rate to 180 strides per minute. This figure was propagated by legendary running coach Jack Daniels’ analysis of the 1984 Olympics.

He concluded that the most efficient and fastest runners had a cadence of 180 SPM, and some could hit the 200 SPM mark.

Later studies have shown that cadence is not as clear-cut as previously thought. Aside from your running ability, height, and weight affecting your cadence, the type of run you are doing also has an effect.

For example, a long cadence or training will be slower than a speed work cadence. This means you should adjust your cadence to the different paces you run (marathon, tempo, normal, and easy, among others).

If you are going to use this concept to your advantage, you need to create a roadmap. This means figuring out where you currently are and where you can get it.

So how do you compute your Base cadence? There are two options:

The first is to use a running cadence calculator app with a heart rate monitor. This will automatically calculate your cadence from running as little or as much as you choose.

The other is by manually computing it by counting steps as you run. Here, you don’t count every step; count the number of times your right foot hits the ground in 30 seconds. Then double this number to get steps per minute (60 seconds).

Take these figures on different runs and use the average to get a more accurate range.

With this metric in mind, you can embark on increasing it for different types of races. To find the SPM you can reach, take your base SPM and multiply it by 5 to 10%. This gives you your individual goal cadence figure.

If, for example, your base running cadence is 162 SPM, your target should be 170 to 178 SPM. Admittedly, this figure is lower than what elite runners hit (upwards of 180), but this seemingly slight increase still enriches your running performance while lessening your risk of injury.

Like all other running aspects, you will likely need more time to hit the magic number. Therefore, take it slow and aim for smaller milestones that will lead to bigger ones. When you have been running at a certain cadence for months or years, it will take your body some time, possibly months, to adjust to a faster cadence and for the new speed to feel normal.

Is a Fast Running Cadence Better?

Why all the fuss? We already have 180 SPM as the benchmark speed to strive for. However, is there any benefit to having a fast-running cadence?

Indeed there is, and a faster running cadence is better than a slower one. And it’s all based on your stride length.

Taking shorter strides allows you to make more steps and run faster. In turn, this running strategy reduces the impact on your joints and optimizes your running efficiency.

You also likely have a longer stride when you have a low cadence. Unfortunately, runners with a low cadence tend to slam their feet on the ground at each landing and knock their knees. This ultimately slows the runner down, delivers an inefficient bouncy gait, and puts extra pressure on bones and muscles.

Increasing your cadence is more than moving your feet faster; it also helps you change the position of where your feet land.

With a low cadence, your foot likely lands in front of your hips. Landing a foot ahead or overstriding is inefficient because it’s almost as if you are stopping motion only to start up again within the same stride.

With a higher cadence, your foot lands underneath you and at the center of gravity. Running in this form decreases your stride length, increasing your turnover. This minimizes the energy you waste from moving up and down. This allows your body to focus on forward momentum, making you faster.

Similarly, research shows that shorter strides limit the ground reaction forces that your muscles and joints absorb, especially at the knees and hips. Additionally, with less time for each stride, there is little time for the hip to drop, the pelvis to tilt, or any other gait glitches that can occur when running.

Another thing that happens when you increase your cadence is limiting your body’s force hitting the ground. You spend more time with your body in the air with a low cadence. This body mass displacement or bobbing up and down causes you to hit the ground harder than if you had a high cadence. A lot of energy is also lost in this way. If you are close to a low cadence runner, you will hear how hard their foot hits the ground. So you can only imagine the impact on their joints.

In essence, the higher your SPM, the more steps you take, and the less time you spend in the air. This gives you a softer impact on landing.

Additional Ways to Increase Your Cadence

We have seen how to calculate your base cadence and compute your optimal cadence. But how do you increase your SPM in training?

Here are some tips:

Running while trying to count your steps can be distracting and counterproductive. So it helps to find a more passive method to speed up without losing focus.

Using a metronome is one way to get the job done. This device projects a certain number of clicks or beats per minute. This should push you closer to your ideal cadence.

2. Focus On Smaller Steps, Not Speed

This is much like the chicken and egg analogy. What comes first: speed or steps? Typically, speed will naturally follow when you work on achieving a higher running cadence.

So concentrate on smaller steps and track your progress. Running on a treadmill can give you some headway because it allows you to set the pace.

Moving your arms faster can help you take faster strides.  Because components are not weight-bearing, they tend to be easier to manipulate, and when arm rhythm changes, feet and legs follow.

Practice drawing your elbows back with short, faster swings. This running technique will increase your speed (this goes for taller runners as well).

You want to do this sparingly because running downhill can put extra pressure on your shins and knees.

There is a good reason running cadence has received much attention from the media and researchers.

Running cadence can help you run faster, but it does much more. A higher cadence will help you conserve energy when running and minimize your risk of injury.

Whichever way you look at it, a higher running cadence can be a stepping stone to great running. So begin by calculating your current running cadence and where you could be, and use our tips to increase your running cadence. You will be all the better for it.